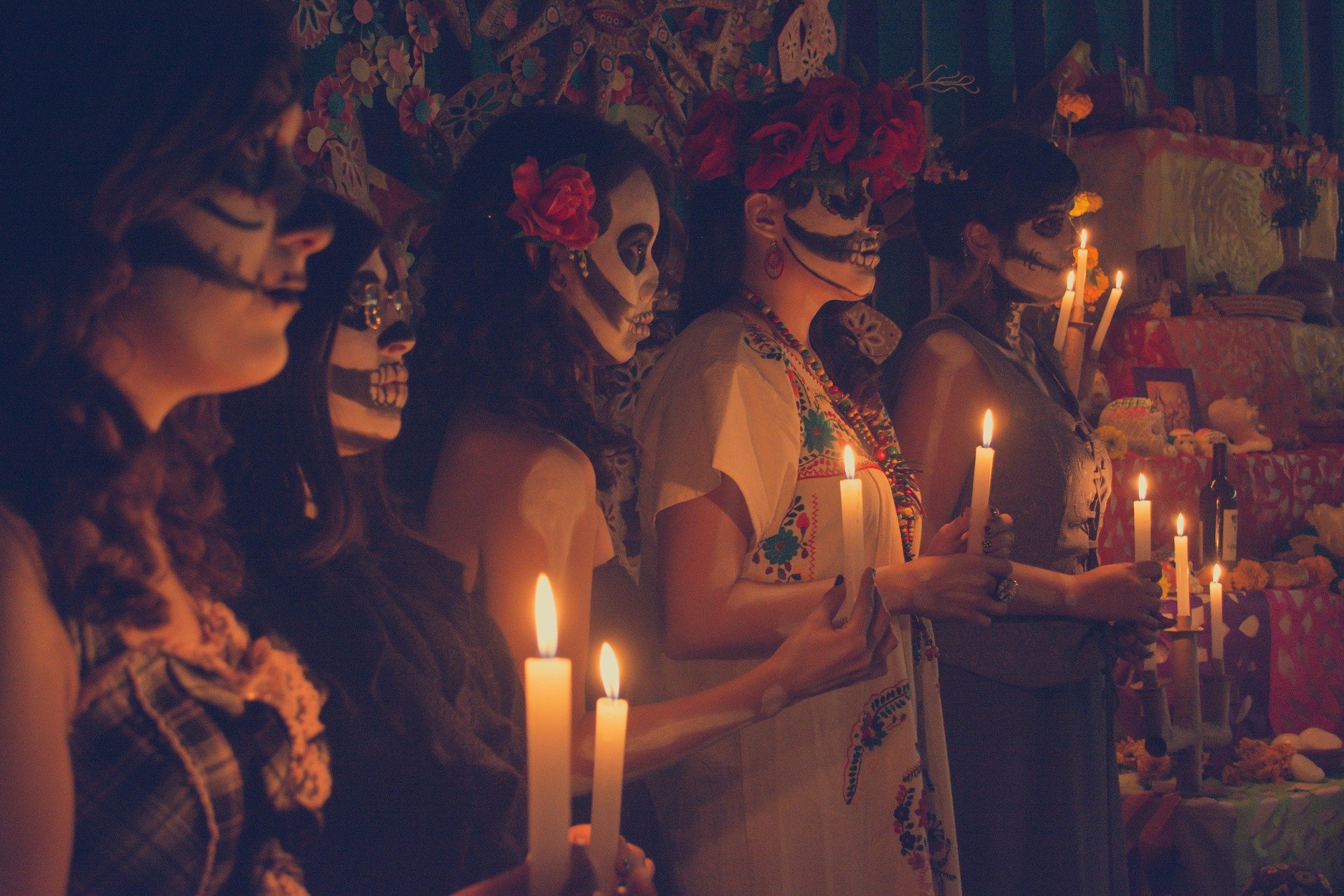 Halloween and Día de Muertos —or the Day of the Dead in English,— sound like similar celebrations. Sure, these traditions revolve around death, but differ in origin and cultural significance.

So, today we are exploring 5 interesting aspects that you need to know about this day!

1. Origin: The Day of the Dead is NOT Mexico’s Halloween

Popular culture believes that this Mexican tradition is a version of Halloween. While Halloween is celebrated at the end of the harvest season and used to welcome the new Celtic year, the Day of the Dead has its origin in commemorating the relatives who have died.

In the Anglo-Saxon culture, Halloween is celebrated on the 31st of October, while in Mexico there is the belief that spirits arrive every 12 hours between the 28th of October and the 2nd of November. More time to party!

El Día de Muertos originated around 3,000 years ago with the Aztec civilisation, who considered that mourning the dead was disrespectful. Instead of portraying death with sadness, natives celebrated with food, music, and activities that their deceased relatives enjoyed in life.

These pre-Columbian cultures considered death a natural phase in human experience. For them, it was important to keep the dead alive in memory and spirit. Colonisers incorporated this tradition into the Catholic holidays of All Saint’s Day, which is celebrated on the 1st of November.

2. Honouring the dead with ofrendas

In the days preceding the holiday, Mexican people build a sort of altar, known as ofrenda, to honour their deceased relatives. Ofrendas have different levels: The simplest consists of two levels that represent Earth and Heaven; some ofrendas might have three stages, which stand for Earth, Heaven and Purgatory.

However, the most traditional consists of seven levels, which symbolise the necessary steps for the spirit to reach Heaven:

During the holidays, ofrendas not only decorate homes, but also schools, offices and public spaces. Public ofrendas often attract thousands of people to admire these gorgeous, coloured altars.

3. The importance of humour

As we mentioned before, Mexico celebrated death with joy rather than grief!

During this festive season, humour pervades daily life, calaveras (skulls) being the main symbol to express humour and satire. Calaveras decorate home ofrendas, graves and windows, and are usually made of sugar or chocolate. Mexican people often customise them with their friends’ names and offer them as a gift on the 1st of November.

But, some decades ago, the term calaveras referred to short poems dedicated in memory of living personages. These epitaphs were satirical and intended to mock one’s weaknesses. Nowadays, it is still common to read these poems in front of family and friends. Some calaveras are even anonymously published in local newspapers and radio stations!

The person who made calaveras a national symbol was José Guadalupe Posada (1852-1913), a Mexican cartoonist. He innovated and incorporated drawings of skeletons into these humourous epitaphs. This artist portrayed skeletons in funny situations, like drinking or dancing. In 1910, Posada created Catrina, who was a female skeleton disguised as a French aristocratic woman. With this character, Posada meant to criticise the upper-class and the indigenous people who tried to imitate the European style, denying their real roots.

Posada regarded death as “the greatest equaliser”. People attribute the quote “Death is democratic” to him. Indeed, no matter your wealth, poverty, or your skin colour, everybody ends up as a skull in the end. Interestingly enough, Posada died in poverty and was buried in an unmarked grave. He was no exception!

4. Visiting cemeteries is part of the holiday.

Going to cemeteries and spending time at the graves of loved ones is also part of this holiday. Families clean and wash the graves of the departed and decorate them with candles and flowers.

Mexicans love using marigolds, or cempasúchil, to decorate graves, houses, and streets. If you are in Mexico at this time of the year, you will probably see this bright, orangey flower everywhere. Marigolds have become a symbol of Día de Muertos, not only because they are seasonal flowers, but also for their strong, unique scent. According to Mexican folklore, the smell attracts spirits on this special day, which is why locals usually create paths with them.

Going back to the celebration, people also bring food and personal objects that were meaningful to their beloved ones. In many parts of the country, families share a meal alongside the graves of their dead relatives, and tell stories about them. They believe that their dead will come back to the world of the living to join the celebration!

5. It is recognised by UNESCO.

The term “cultural heritage” does no longer limit to monuments or tangible creations by UNESCO, (United Nations Educational Scientific and Cultural Organisation). They also included living expressions of culture that have passed from generation to generation. In 2008, UNESCO recognised the significance of Día de Muertos, and added this tradition to its list of Intangible Cultural Heritage of Humanity. Thanks to this recognition, the Day of the Dead is now more popular than ever!

Mexico is a large, diverse country and, as such, it is quite a heterogenous place. Thus, celebrations for the Day of the Dead vary from one region to another, so it’s quite common for towns to have their own traditions. For example, in Michoacán it is typical to travel to the cemetery by riding candle-lit boats at night-time!