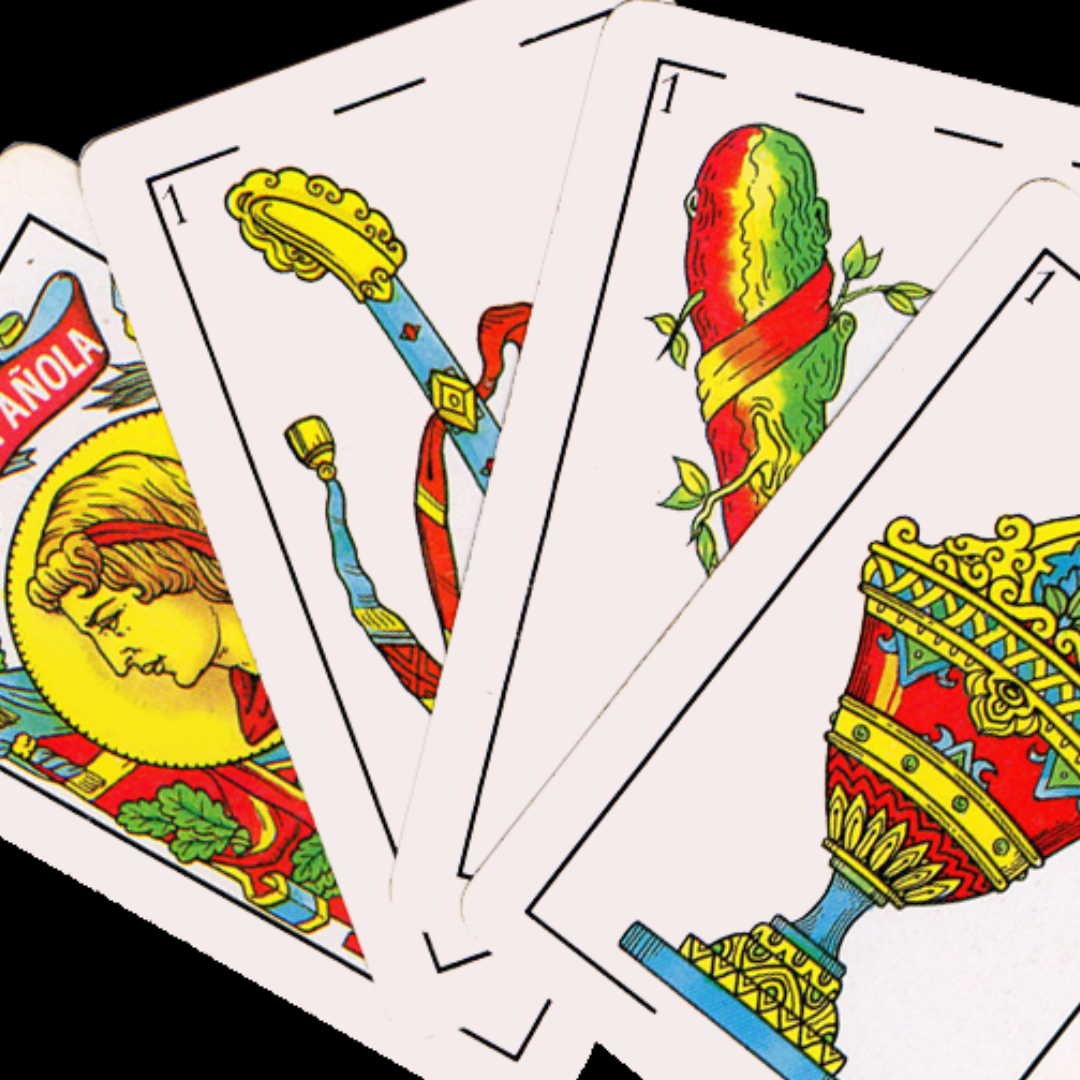 Do you like playing with cards? Like literature, music or achitecture, board games also help us understand the lifestyle of different countries and societies. The Spanish playing cards have been around for centuries and they are a key part of our popular culture. The Spanish deck has a number of peculiarities that make these cards unique in the world. Let’s discover why!

It’s important to know that, before being a great entertainment, cards were used for magic and fortune telling. We know that playing cards might have invented in China around the 9th century AD. However, it wasn’t until the 14th century that they arrived in the Mediterranean countries via the Silk Route.

The Silk Route encompassed a series of trade and cultural roads connecting Asia with the West by merchants, pilgrims, soldiers, etc. for a long period of time.

#2. The interesting design of the Spanish cards

The Spanish playing cards stands out for its rich designs. The type of deck includes 40-48 cards that are divided into four suits or families: Gold, cups, swords and clubs. But why these elements? Well, there is a reason behind it.

It’s widely believed that these families represent the different social strata of the medieval society. In this way, coins stands for money and nobility; cups represents the clergy; swords is the symbol for the army and knights and, finally, clubs represent farmers and peasants. Interesting, right? Here’s a clearer representation:

Everyone knows that religion dominated the medieval European society. Most people were fully convinced of the validity of the church’s teachings without a questioning doubt. According to the Catholic church, card games posed a serious threat because they took time from praying or going to church. So playing cards were regarded as an evil game! What’s more, the then King of Spain, Alfonso XI, banned his soldiers from playing because of gambling.

At the same time, a substantial part of the Iberian Peninsula was still under the Moorish rule in the 14th century. The Koran and Islam state that playing cards is not allowed even if the game doesn’t involve money because Muslims get distracted from prayers. Never a game had so many enemies!

Another interesting fact about the Spanish playing cards is that the original deck used to have 56 cards. Four of them were figures (jack, knight, queen and king). This meant that the queen received number 13 in the suit. Because number 13 symbolises bad luck, they removed the queen from the deck forever! Interestingly, this makes the Spanish deck the only one that does not have a queen in it.

#5. Easter eggs in the cards

To be honest, I have been playing with the Spanish cards since I was a child and never noticed these hidden details. Spaniards are different and our cards were not going to be less!

The frame: If we look closely, we will spot different lines depending on the suit. Cups have got one; swords, two, and clubs have got three. However, coins is the only suit that has got a continuous line. This detail makes it easier for the player to see the cards they are holding.

The brand: Generally, we can find information about the deck’s manufacturer in the Ace of Coins. For instance, in the example below we can spot ‘Heraclio Fournier’, who founded in 1870 one of the most well-known Spanish playing cards companies.

#6. Our cards deserve a museum, of course!

Because of its rich history, the Spanish cards have the honour of having its own museum in Vitori-Gasteiz. The Museo Fournier de Naipes de Álava opened in 1986 and it’s closely linked to the card company created by Heraclio Fournier. Thus, this makes Vitoria one of the few places in the world of having a museum dedicated to this popular game. Moreover, you’ll be able to see a wide range of decks that came from different cultures. If you happen to be in the Basque Country, it is worth visiting it! The museum is completely free and accessible for everybody.

Originally, the French card-makers in the late 16th century designated the four kings of the deck were King David, Alexander the Great, Charlemagne, and Iulius Caesar. However, this designation was ended in the late 18th century and from then on, the kings in decks of cards have represented no specific person.

So what about thr Spanish cards? Who are the people behind the figure of the king? Actually, they say the four kings just represent one person: Fernando VII of Spain (1784-1833).