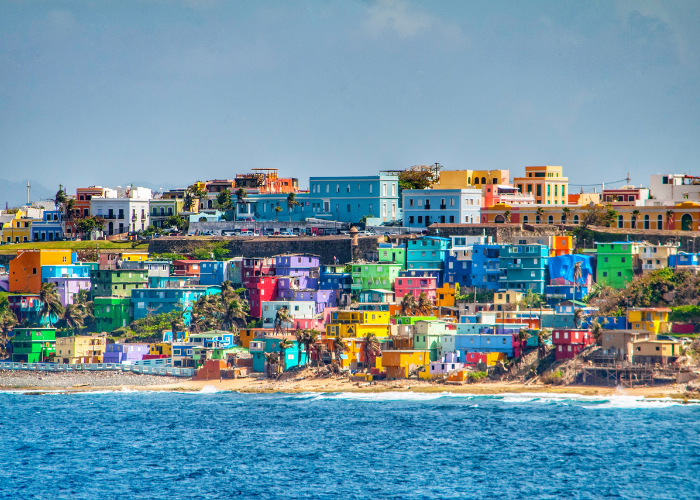 Today we are discovering 7 amazing facts about Puerto Rico that you probably didn’t know before! From luminescent beaches and forests to a flourishing reputation for rum and street art, Puerto Rico is a country full of surprises. There’s no better way of celebrating Hispanic Heritage Month, so let’s get started!

In fact, Puerto Rico is an archipelago (a group of islands), with one main island and a few smaller islands. Puerto Rico is the biggest one, but there are also another three: Vieques, Culebra and Mona.

Are you a Christmas lover? Then Puerto Rico will be your ideal destination! The island is known for having the longest Christmas in the world!

Christmas lasts for 45 days in Puerto Rico. It starts with Thanksgiving, and it finishes in mid-January with the San Sebastian Street Festival.

The original inhabitants of Puerto Rico were the Taino, which populated most of the Caribbean during the Pre-Columbian Era.

If you explore the Taino Route, you’ll have the chance to see ceremonial centers, tombs, caves and natural reserves.

There are very few beaches in the world that have these characteristics, and Puerto Rico has got three!

A luminescent bay is the result of an ecosystem whose microorganisms liberate energy in the form of light, which makes water shine in the dark.

Puerto Rico is known for being the rum capital of the world. In fact, Casa Bacardi in Cataño is the biggest distillery on the planet!

With so much rum, it’s not a surprise that Puerto Rico is famous for its wonderful cocktails. And, talking about cocktails, Piña Colada was recognized as the national drink in 1978! Thank you, Puerto Rico, for this fantastic mix of coconut cream, pineapple juice, white rum and ice!

Art goes beyond museums and art galleries. In Puerto Rico you will find art wherever you go, from Santurce’s murals to El Viejo San Juan. There is no better place to enjoy the work of the best street artists!

El Yunque is a forest that stands out for its enormous ecological richness. Its bioluminescent mushrooms and ferns turns El Yunque into a magical, Avatar-like place during the night!

That’s all, amigos! I hope you have enjoyed these amazing facts about Puerto Rico. You can find more interesting facts about Spanish speaking countries on the Culture section of this website. And if you want to continue learning about Hispanic culture, don’t forget to follow us on Instagram!