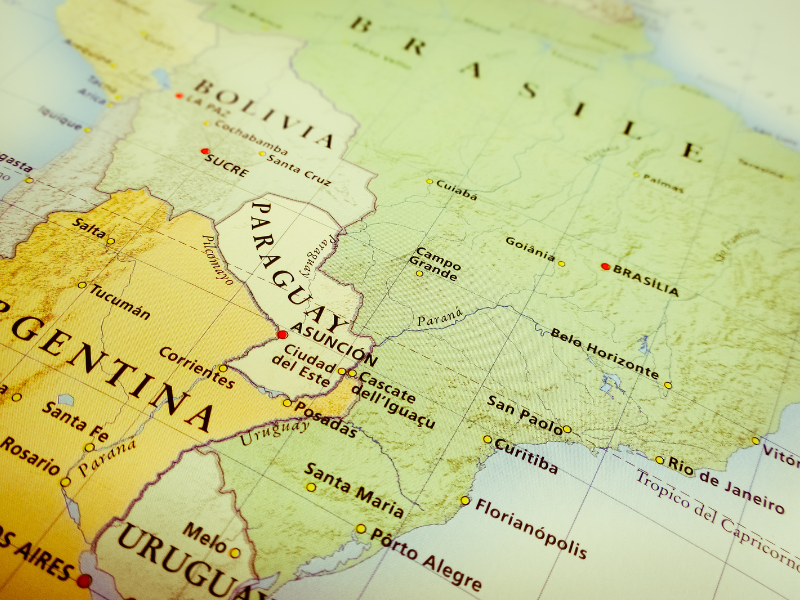 Learning about the history of Hispanic culture or its traditions is a great way to achieve cultural immersion. Have you ever wondered about the origin of the names of the Spanish-speaking countries? What’s behind the name of beautiful countries such as Mexico, Argentina or Cuba? Why are they called as such? Continue reading to discover the interesting origin of the names of all Spanish-speaking countries!

The name of this country derives from the Latin term argentum, meaning “silver”. This country had a great source of precious metals and other valuable minerals. The first use of the name Argentina originated during the trips of the Spanish conquerors to Río de la Plata.

Bolivia’s name is probably one of the most predictable from the list. The country was named after Simon Bolivar, one of the fathers of the South American Independence during the 19th century. It’s a great idea to have a country with your name, right?

There are several theories about the origin of the name of this Spanish-speaking country. Some historians suggest it comes from chilli, meaning “boundary” or “edge”, as Chile was the limit of the Incan Empire. Others hold that Chile originated from the word tchili, which means “cold” or “snow”. Both are reasonable!

Colombia’s name was an homage to the explorer Christopher Columbus, who led the first Spanish expedition that arrived in America in 1492. Nowadays, its official name is the Republic of Colombia, but in the past had other names such as Nueva Granada or Gran Colombia. Colombia is well-known for its culturally rich heritage, coffee and the kindness of its people!

Costa Rica literally means “Rich Coast” in Spanish. Some theories hold that Christopher Columbus gave that name to this land because of the quantity of gold jewellery worn by natives. Apart from precious metals, Costa Rica is also rich in stunning beaches and diverse animal and vegetal species!

Historians believe that the name of Cuba comes from the Taíno term coabana. The exact meaning is not clear, but it might be translated as “where fertile land is abundant” or “great place”. Definitely, the etymology suits the country well!

Any doubts about why it is called Ecuador? Its name clearly responds to the geographical location, in the famous line that divides the Northern and Southern hemispheres of the globe. Ecuador adopted this name after becoming independent from Colombia in the 1830s.

According to the Oxford Dictionary, this country took the name of El Salvador because there used to be a Spanish fortress located in the current capital, San Salvador. Did you know that El Salvador is the smallest but most densely populated country in Latin America?

Although the origin of España is uncertain, we have several theories: When the Greeks arrived on Spanish soil around 600 B.C, they referred to the Iberian Peninsula as Hesperia, meaning “land of the setting sun”. The Romans arrived a century later, calling this territory Hispania (from sphan, “rabbit”), which means “land of abundant rabbits”.  Later, this became the current Spanish name for the country. I guess rabbits won over the sunset!

Even though its name might sound a bit negative in Spanish (because of mala, meaning “bad”), Guatemala has one of the most fascinating origins. A theory holds that it comes from the term Quauhtemallan, meaning “numerous trees” in náhuatl, an indigenous language spoken in Central America. This is why its people usually refer to Guatemala as the country of the eternal spring. Guatemala is one of the most forested countries in the world since 33.7% of its land is covered by forests and protected areas.

You might have noticed that the world has several places called Guinea: Equatorial Guinea, Papua New Guinea, the Gulf of Guinea… What explains the prevalence of this name?

Etymologists have traced Guinea to the Berber word aginaw, standing for “black people”. Others think that it originally referred to Djenné, a trading city in the current Mali. In the 15th century, Portuguese sailors used the term Guiné to call an area near Senegal, and by the 18th century, Europeans used Guinea to refer to the West African coastline.

Honduras, like many other Latin American countries, was explored by Columbus at the beginning of the 16th century. It’s not clear who baptised this land, but the historian Robustiano Vera wrote about how sailors described its coastal waters as “Honduras”, which in Spanish can be translated as “depths”. Have you ever dived in Honduras’ waters?

This is definitely one of my favourites of the list.

The country of Mexico wasn’t always called as such. This land was called many things by many different groups of inhabitants, from the Aztec people to Mayan and the Spanish colonisers in the 1500s. Several hypotheses explain the origin of Mexico: One proposed etymology comes from the nahuatl Mexihco, meaning “Place in the Centre of the Moon”. Another legend suggests that Mexico comes from the deity and patron Mexi. Mexico would then mean “Place of Mexi”, or “Land of the War God”.

Some argue that Nicaragua comes from the name of an indigenous leader called Nicarao. Others suggest that the nahao tribe called this area Nicanahuac, meaning “this is how far the nahaos have come”. Over time, that name developed into Nicaragua.

The name of Panama has got several interpretations: We know it was called Panama after the city Panama, capital of the country. The origin of this word traces back to the tribes living in that area. Its meaning was “abundance of fish and butterflies”. A second theory says that Panama comes from panna mai, meaning “beyond”.

Have you ever heard the Spanish expression “guay del Paraguay“? It means something like “Amazing!” or “Great!”. And no wonder why! Paraguay has got one the most beautiful etymologies:

There is no doubt that Paraguay comes from the Guarani language. One view suggests that the name of this beautiful country means “river of crowns” (paragua meaning palm crown; y meaning water). Other interpretations are “adorned waters” or “river that gives birth to the sea”.

In the South of Panamá there was a vast land which natives used to call Birú. When Francisco Pizarro started conquering these lands, he called them Perú. The name Perú makes no reference to specific regions or ethnic groups, and it does not belong to the Spanish nor to the Quechuan language. We could say it is politically neutral. Today, the word Perú is associated with an independent country of historical, ethnic, and ecological richness.

The Dominican word comes from the Latin Dominicus, meaning “Sunday”. However, the name of the country comes from Santo Domingo de Guzmán, founder of the Order of the Dominicans. Perhaps because of its religious past, this is the only country that has a Bible in its flag!

Uruguay can mean “river of snails”, derived from urugua (snail) and y (water, river). Nevetherless, some authors believe that Uruguay means “river of birds”, since uru also means “bird”. In fact, Uruguay is full of colourful flowers and birds… What do you think? Which version do you prefer?

The explorers Alonso de Ojeda and Americo Vespucci observed that natives’ homes were build on wooden poles, just as in Venice. Because of this resemblance, they called this new place Venezuela, which literally means “little Venice”. However, some documents suggest that the first explorers arrived in a small island called Veneci-uela, hence the name!

That’s all for now! Now you know more about the origin of the names of the Spanish-speaking countries! Do you think their names do justice to their natural beauty?